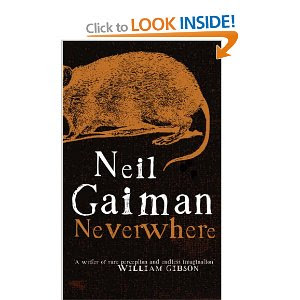 'There are two Londons. There's London Above - that's where you lived - and then there's London Below - the Underside - inhabited by the people who fell through the cracks in the world. Now you're one of them. ' Marquis de Carabas

Trust me to choose a book that is almost impossible to write about not only because I run the risk of sticking SPOILER ALERTS all over the post but because it is so difficult to get my head around all the layers in this story without going on and on at you without even getting to the locations! Here goes...

'Neverwhere' is the story of Richard Mayhew, a newcomer to London, who finds himself caught up in in a murder mystery/kidnap plot/treasure hunt that takes him literally to the underside of the city all this whilst being pursued by two of the most evil villains I have ever encountered. He encounters human embodiments of some of London's most famous landmarks including Old Bailey , an old man, known as a roof-dweller, who can talk to pigeons and rats, and The Black Friars who guard the Bridge and talk in riddles. The story is packed with little references to areas away from the tourist trail as well as transforming some of the most famous places into fantastical worlds while the rest of London Above is asleep.

It is a brilliant story, perfect for people who like alternate reality novels as opposed to full-blown fantasy epics. Neil Gaiman hints in the introduction that he could revist the idea in the future but possibly not as a sequel set in London, although I wish he would. There is a whole world that could be expanded on like Terry Pratchett's Discworld, after all who hasn't finished this and wondered, Why don't you want to meet the shepherds at Shepherd's Bush? or Why are there still Romans camped out by the Kilburn River?

The edition I have is the Author's Preferred Text, like a Director's Cut, and has lots of interesting things at the back like an interview with Gaiman and the original prologue. This is where I discovered that the series had already been adapted for the television, in fact it started as a teleplay and Gaiman wrote the book to include all the scenes that got cut. The DVD is cheap enough on Amazon although it did come in for some criticism because of the filming quality. I haven't seen it, probably something to write about in the future, but if you would like to see some clips you can see them on youtube here and here.

Many of the locations in 'Neverwhere' are real although some are virtually unknown to many Londoners. Due to the location of London Below a lot of the action takes place in sewers, disused tube tunnels and alleyways and if you look hard enough they really are there. All the locations are located on this googlemap with the plotpoints linked for reference but be warned inevitably there will be spoilers.

I've also included below links to some brilliant sites I discovered in my quest to find pictures of some of the underground locations many of which are closed to the public.

Neil Gaiman reveals in the introduction and interview that filming took place in Aldwych and Down Street Stations. Down Street Station is a location in the book presumably as the setting for Serpentine's dining room. I found a brilliant site all about the disued rail stations and excellent pictures from inside. Click here to take you to the tour of Down Street Tube Station but also make sure you visit here for before and after shots of British Museum Station. I have found it very hard to find pictures of latter and many urban explorers have said it is much harder to access disued tube stations in recent years.

Near the beginning of the story Door sends Richard to deliver a message to the Marquis De Carabas and Gaiman details specific instructions on how to get there. In January I followed the route. Being a frequent visitor to London I already knew in my mind's eye where this location was based on Gaiman's instructions but I was still surprised by how accurate it was. Yes there is no Virgin Megastore in Oxford Street anymore neither but the souvenier shop is still there hey presto there is 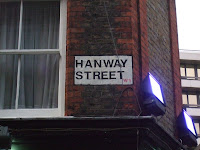 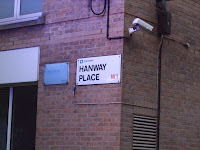 but no Orme Passage (there is an Orme Court in London but nowhere near Oxford Street) however the Indian Restaurant, now a Chinese Restaurant, is still there but next to a brick wall where Orme Passage should be. You can see really good shots of where it would be if you GoogleStreetView it.

As far as I know the following places in 'Neverwhere' are fictional:

There are also some non-descript places that probably do exist in London but do not have specific locations such as the abandoned victorian hospital that Croup and Vandemar spend a majority of their time as well as the place that Richard meets the Iliaster and descends into London Below.

If anyone has any ideas or more information please leave your comments!

Posted by Walked-In London at 9:16 AM

A look at London through the books and films it has inspired.